A Strange Day on Planet Earth

Up and Down the Mountain Again

On the mountain the chamisa is glowing, this shrub Gaia here wears like an encompassing sweater in every direction. It thoughtfully blooms in riotous yellows just as the summer wildflowers begin to fade.

The little snakes are more prolific, basking in sunny patches and swooshing away when they feel my footfalls. Some days the stream is dry and some days swollen, and I cannot understand the trickery by which the water comes and goes without correspondence to the rain. The sun sets ever more quickly and dramatically. And then in starlight I wander the surrounding roads as the land writes a love letter afresh night after night, in choruses of crickets and katydids.

Down the mountain, there are bombs in subway stations and presidents with advanced signs of dementia writing very bad haikus called “tweeting” everyone then works hard to either decipher or to believe. I continue to feel I am living in two different worlds, one sane and one that does not know what sanity is. The strange thing is that these worlds exist on the same planet—or more accurately, that a terribly silly and dangerous human simulacrum somehow sprouted on this mystical being called Earth. We remain hypnotized by our own species and its endless speaking, we who sprung so late in an evolution that had been dancing itself for billions of years.

We knew the rhythm, it seems, for some hundreds of thousands of years too. It wasn’t so long ago, perhaps 6,000 years, that the Indo-Europeans hatched a disease called patriarchy. One feature of this disease is an intense desire to spread it. It spread through war and conquest and rape and ethnic cleansing and trauma. It spread so far and so deeply most of us now call it “human nature.”

The mystery is that the disease could ever thrive here, surrounded by so many wise ancestors—be they towering pines or the blossoming, majestic citadels called mullein flowers.  Nothing else is insane.  Only us.  And feeling the contrast is the most insane thing of all. 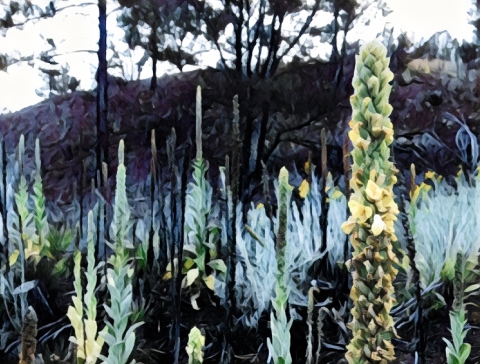 Re-hearing Jane Caputi talk about the symbolism and blood rights of patriarchy tonight, it occurred to me that the contrast is integral to the design. Of course the system bludgeons one with such unremitting inanity and crudity, as it could never work otherwise. Against the choruses of crickets and katydids, nightly and faithfully calling us back to ourselves, it needs 24-hour cable news and fluorescent lights and cement blocks and drone bombs and endless wars to keep us in a sufficient stupor. As Gaia, even after so many years of bludgeoning, still wields the power to draw us home in a single breath.

It works with women the same way: they have to keep the pornography and talking heads and sexual harassment churning like so many coal plants, lest for a moment our cumulative self-knowing catch its breath and strike back with the force of a million vipers. So I suppose the unbearable unbearability of everything is somehow a reflection of the intense beauty of everything that came before, which the dominant powers must work tirelessly to suffocate out of us and our living memory. I could never understand why patriarchs are always so nervous (see how they react to even small protests) when they already own all the weapons and monies. But in the scent of their fear is the same knowing that we know too, of the right order of things.  It is always pressing to reassert itself, like a seed seeking the crack in cement.

For a shivering minute recently, on this mountain, I held the gaze of mule deer.  Mule deer primarily move by prancing, which more serious people call stotting—and I dare anyone to not feel dizzily euphoric when they witness it. Am I naive to think the system would wither if everyone had access to a mountaintop with swooshing small snakes and prancing mule deer?

The dangers are all around, the sister species threatening to reawaken the wild  slumbering in our cells.  So cue televisions in waiting rooms and cue traffic fumes and cue schools built like prisons and cue private property and cue the mafia euphamastically called private health insurance companies and cue monosodium glutamate and cue aspartame and cue roundup and cue twitter and cue debt and cue militarized police and cue nuclear waste and cue Paul Ryan.  Cue insanity.  Cue manufactured insanity dripping round the clock, more than one person could ever track.

So, my society is insane.  It considers disease to be health. It preaches that the ones still standing with money in the end will “win.” It hands obnoxious people with dirty money awards.  It hands rich people with dirty money more money.  It glorifies a certain image of Man while disgracing his mother, his sisters, his brothers, and all his relatives. It hates women, the most unreasonable proposition of all.  It seemingly hates pure air and water and the original peoples and all good things.  It bombs anything that might puncture the empire walls.

Meanwhile the light has a golden edge in these pre-Equinox days, and the stars have a stronger pulse on these moonless nights, and the trees speak constantly, waiting for someone to listen.

So I pray to remember what health is. I pray for the mule deer and the mullein flowers and the tiny succulents and the grandmother pines. I pray everyone meet a piece of land that keeps them honest.